Trifexis is a single tablet given to dogs once a month to kills fleas, prevent heartworm and treat and control adult hookworm, roundworm and whipworm infections. 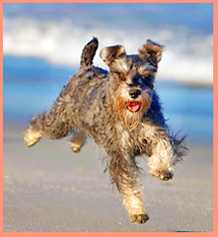 Veterinarians may recommend the use of this drug for parasite and flea prevention. It usually comes in the form of a flavored, chewable tablet.

It should never be given to:

Advice should be sought before giving it to breeding males or females.

Trifexis is, however, not without controversy.

There is much anecdotal evidence from dog owners who claim that their pet has suffered side effects after being given a dose of it. 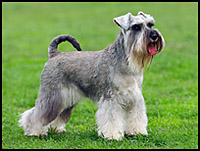 On this page we will present the facts about the drug and some comments which pet owners have contributed to out website. It is for you to make up your mind whether to give Trifexis to your schnauzer if prescribed it by a veterinarian.

It is also worth remembering that there are many other effective treatments out there for fleas, worms and parasites.

Spinosad is a biologic product, an ultra-fast flea-killing tablet. It is classified by the USDA as an organic substance and considered a drug, not an insecticide.

Milbemycin is a strong drug able to interfere with a parasite's nerve transmission, causing death of many forms of parasites

Here are what some readers of our Max-the-Schnauzer website have had to say about it (all names have been removed):

"I went to the vet to after having the heart worm test of course to check on heart guard. I was already using confortus to prevent fleas and my vet talked me into using trifexis. My 6 year old dachshund had taken the first dose and i noticed her acting a little differently. . . Lethargic, and some drooling.

Didn't think much of it since it was a hot august. Then one day after the second dose she was very lethargic, excessively drooling, breathing hard, dazed and confused, couldn't jump even though she seemed to want to, very depressed looking, and had to be picked up from time to time(i could tell she wanted to listen but didn't seem to want to move).


Got money back on day 2 talked to vet office. They had not heard of any such things, and did not offer and thing so i assumed since it was time release and fairly new id wait it out. She even disappeared for 5 days! Maybe too disoriented to find way back.

She gained 7 pounds within that 2 month period. well several months later she had not improved nor had i heard anything i am treating a severe skin infection that showed up and seems to keep returning. she still has a hard time breathing and can no longer JUMP! vet just wants to treat symptoms: thyroid or cushing's disease.

I have been to two different vets. I don't know. I need more stories of severe cases. plus I am upset and don't want a million dollar dog, which she is quickly getting to that. she is my baby and i can't bear her in this condition."

"My advice is not to use Trifexis. I gave my mini schnauzer one dose and within 2 hours he became so lethargic he could not keep his head up. He was totally fine and energetic up to that point. He would not eat or drink. My Vet told me to give it 24 hours and it should be out of his system. After 24 hours, he was still the same.

So, I started researching the internet and saw lots of people with the same experience in all breeds and sizes of dogs. I then contacted my Vet and told him about what I had been reading. At 11pm, my Vet called me and ask me to please bring my dog in so we could start fluids and flush that drug out of his system. After a day of fluids, he finally started to be himself again.
That was 5 months ago and I have had no problems since. I now give him Heartguard and use Advantix II for flea/tick problems.
Trifexis has only been out for a little over a year. It should be recalled, because from what I have read, it has killed some dogs!
Thank goodness it didn't kill mine!"

"I'M NOT SURE, BUT A SECOND PILL OF TRIFEXIS MAY HAVE STARTED A SKIN CONDITION IN MY CHIHUAHUA.
I FOLLOWED IT UP WITH RECOMMEND BATHS & SPRAYS, BUT STILL THE CONDITION EXISTS WITH SCRATCHING & BITING.
WE WILL STOP WITH THIS MEDICATION GOING FORWARD!!
DOES ANYBODY HAVE A RECOMMENDATION PLEASE?"

"They aren't schnauzers, but,I started giving my 2 Chow Chows it 6 months ago. No problem at first.
Now my male vomits about 4-5 hours later and my female has a horrible skin infection.
Don't know if it was caused by the Trifexis but will no longer be giving it to them!"

"My girlfriend lost her pit bull and gave us this medicine. I should have researched it first.
I gave to my roommate pug, my schnauzer, and my lab mix. Lab mix o.k. pug got really sick and had to hold her all night but morning came for them to walk she was O.K. and she ate, thank goodness.

Now my schnauzer wouldn't get up and had no energy always excited to walk in morning I had to make her found tongue hanging out and came back from walk and she wanted to lay down again no energy. Put her in bed with treat she finally ate it but held before work like a baby. I am scared hope she is o.k. when I get home for lunch to check on her. Has anyone else schnauzer had this side effect with this medicine.
Do I need to take her to vet"

"I am so sad to say that we lost one of our three Schnauzers today.
I had a very tramatic experience yesterday with her. She vomited really bad, then about 1 hour later she started having seizures. Rushed her to the vet, first thing I told him was she had Trifexis the day before.
They kept her overnight trying to keep her from seizing. She had a major seizure this afternoon and her heart gave in and she didn't make it. Although we had only had her 2 years (she was a rescue, that was almost dead from starvation and had heartworms which we healed her of) it still broke our hearts.
The most tramatic thing was watching her during the seizures. It was horrible, hope I never have to see it again. NO MORE Trifexis. All vets should warn their patients about these side effects, nothing was ever told to me, and now I have lost a beloved pet."

"My two male schnauzer brothers, 1.5 yrs old, have had 6 doses of Trifexis. Each time I have noticed strange behavior, some diarrhea, and lack of interest in food. It was hard for me to explain to the vet what I meant by "strange behavior". And I still can't really describe it but they act differently for about 2 days after each dose. Def, will be going back to a different med for next month."

"My Mom's toy poodle has the same symptoms plus seizures after only one dose of the Trifexis. She took the dose a month ago and has been sick ever since. The vet told Mom that it she was having side effects from the medicine. We are just hoping that this will wear off. He is treating her with some steriods, but it is really not helping. Good luck with your dog! Pray they will get better."

To add your own comments to our section on Trifexis, click here

Go back to the main Schnauzer Health page

Return from Trifexis in Dogs to the Home Page