Looking for companion for my Mini Schnauzer following bereavement 04.11.16 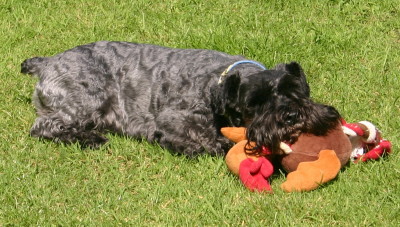 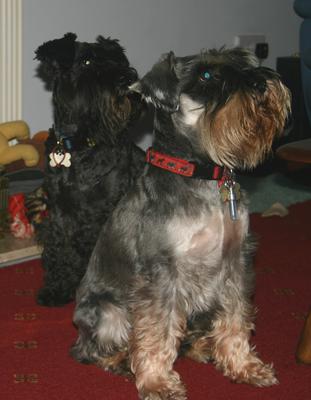 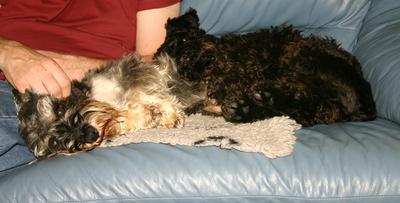 Both dogs laying against my husband.

I live in Trowbridge in Wiltshire, and have a house with garden.

I took early retirement some years ago so am home all the time apart from shopping and dog walking, or doctor's appointments.

I live with a 12 year entire male Schnauzer called Sooty, he recently has undergone bladder stone removal surgery (second time, last time was 2012).
I adopted Sooty privately when he was 10 months old, from his previous owner who had him in a flat with no garden and wanted to rehome him. On the same day we adopted 3 and a half year old retired show dog Alfie from some friends who breed and show (Ted and Sally Ilot).
Sooty's companion for over 11 years went over the rainbow bridge in August, a couple of weeks later my husband joined him after a battle with cancer.
Sooty is now suffering separation anxiety and being very clingy and I think he needs a new companion. He is still playful, loves to be chased round the table or garden with one of his many toys.
Ted and Sally don't have anything available at the moment.
I have two small grandchildren who live a couple of hours away so when they come to visit they stay at least one night. They have been quite good with both Sooty and Alfie, having been taught to be gentle. My 4 year old grandson loves to hold the lead when it is safe to let him, and the nearly 1 year old Lily loves dogs and woofs at them!
My vets are Garstons and are just down the road.
I hope you can help me find the friend Sooty needs.
ceevee@moonrakers.plus.com