by Paige A
(Hamshire, TX) 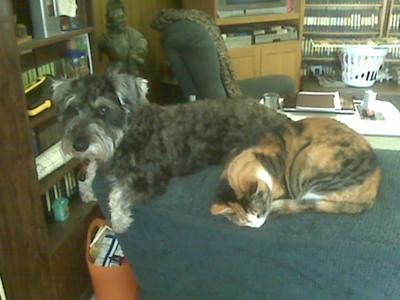 Our Sgt. Schultz is a mess. We aren't sure if he is part mountain goat or what! We think he has picked up bad habits from the cats too!
He was born in Winnie, TX and called me Little Man, but when I took him to Hamshire, TX, to live with me, we changed his name to Sgt. Schultz; Schultzie for short.
Ok, I know he is a dog, but I am not sure he knows it sometimes... I think he loves to pretend he is just one of the gang. Let me explain... We had some furry critters, called CATS, when Schultz moved in. They run and jump and sit with us and even take naps in our laps. Since Schultz also likes to run and jump, they became really good friends. Schultz, Snowball, Marmalade would play chase in and out of the house, while Mama tended to be more of a watcher than a participant. There were times, when they would all nap together too, sitting in our lap.
Sadly, we have lost two of Schultz' best friends, Snow and Marmalade. That leaves just Mama to play with.
Mama being older doesn't run quite as much, nor does she enjoy playing chase, like Snow did... Mama thought the back of the recliner was "home", when they played chase, but I watched as Schultz climbed right on up there with her. I guess once he was there, he saw things from a new perspective. So now, he enjoys just lounging on the back of the recliner. Sometimes sharing the space with her. We are thinking of getting a new kitty now. One that is younger, more apt to play, but we will definately take Schultz along, to help pick out his playmate!!!
Signing off...