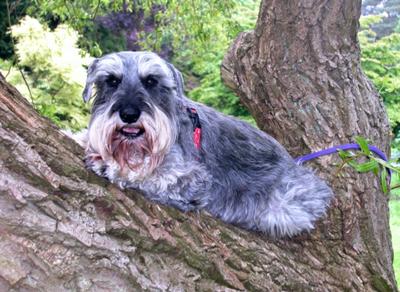 Rebel 1 in his favourite tree

Rebel 1 was my pepper & salt boy and sadly he said Goodbye two weeks after this photo was taken.. he was fine, but suddenly went downhill.. and was off his food, and was drinking too much.
I regulated his water, but then decided to take him to my vet who told me he was in the final stages of Kidney Failure, which I gathered as schnauzers are prone to this.
Ater an examination there was blood in his urine and 4 days later he passed away in my arms knowing that we'd love him forever..