Gabbana resting on her Mommy. 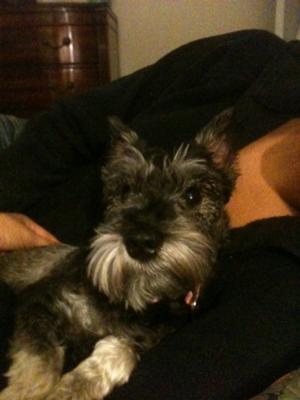 Gabbana laying next to my older daughter. 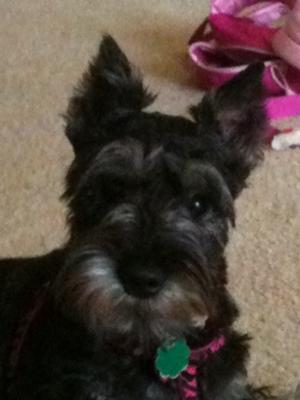 Gabbana - so cute, but unpredictable...

I have 2 mini schnauzer females: a 3 yr old angel named Zoey, and a 1 yr old named Gabbana. Both are very well cared for and extremely healthy. Gabbana is FULL of energy and excitement. Every morning & evening, she gobbles her food like she's never eaten. When we take her outside to potty, she charges, growls and barks madly at both people and other dogs. She is extremely affectionate and LOVES to hug and cuddle close up to your neck - but lately, when she's laying with you, if you go to move her away, she bites at the face.
Over the weekend, she was "hugging" me, and I kissed and hugged her, but when I was ready to move her off of me, she snarled and bit my nose which bled and bled. Several days ago, she was laying next to my 10 yr old daughter, and when she went to kiss her, Gabbana sneered her lip... so Sienna told her NO and started to get up away from her, and Gabbana leaped up and bit her cheek! She recently bit my finger when I tried to remove some gum from her mouth that she found, and several weeks ago, she bit my daughters lip. Why is she seemingly-intentionally biting our faces? She demands affection and constantly jumps up into our laps to snuggle. But this unpredictable behavior is very concerning.
She is also very dominating of 3 yr old Zoey. Zoey gets very annoyed with Gabbana always leaping at her and pouncing on her so eventually Zoey will put Gabbana in her place. But Gabbana doesn't seem to care that Zoey is the alpha dog in the family. They are such different personalities. I feel bad for Zoey that she is harrassed so much by Gabbana. Zoey is just a gem, obedient, loving, affectionate, mild. Gabbana is like dynamite. My husband feels we need to get rid of her - even to put her down as one "rescue" suggested -- they said face biting makes a schnauzer unable to be placed in any other home for fear of her aggression. HELP! What are we to do???