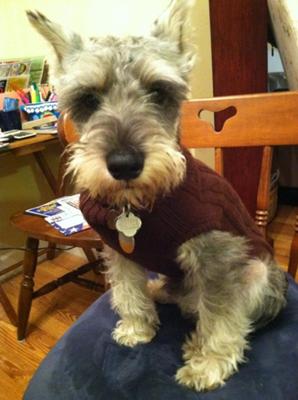 We got Kiwi soon after our first dog Molly died. At age ten Molly died from heart failure. I was devastated and cried for weeks and the last thing I wanted was a dog, to be completely honest- it just felt wrong.
But Kiwi came into our lives regardless, because my cousin couldn't give him the attention he deserved and my dad works from home. We took him in and it didn't take long to figure out how much love we had for him -despite all of the hurt we were feeling.
Kiwi is now three years old and the sweetest, gentlest, human-like, infant-like dog EVER-- it is hilarious! He's sweet and clumsy and will fall asleep in your arms. I have gotten compliments on how adorable he is because he still looks like a puppy even now!
Another funny note to add: when he was bought, he was the last of the litter at the pet store- facing the inner corner of the cage and was 50% off!! & my cousin had a coupon! we joke about it all the time but he's worth so much more than what she got him for! haha. I would do anything for my little guy.
Schnauzers really are the best! (& beagles of course :))