Is Jack-Jack a white schnauzer? 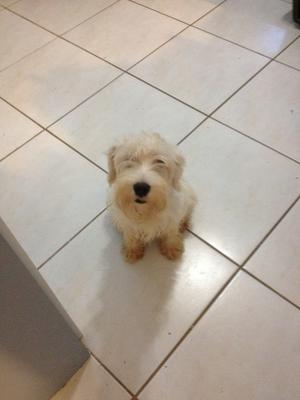 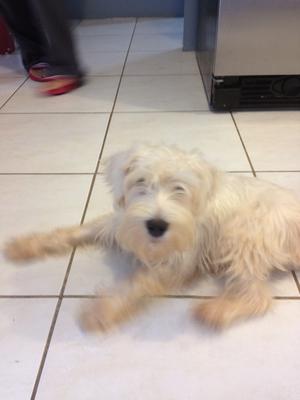 Our family had been wishing for a miniature schnauzer (preferably salt and pepper) for a long time. We live in the Caribbean where only a few people have, those who were willing to go through all the importation dramas. People don't breed them , most people don't even know about them. Over the last week, We researched bringing in one from the US or the UK, but every corner we turned there was a road block. We almost paid down on two different ones but the expensive rabies shots and quarantines stopped us. Soon after, we were driving by a pet store where we usually get our fish food, and we thought we could ask the owner if he had any tips on importing that would help us. When we mentioned the breed of dog we wanted, the owner casually remarked that he had one of those in the 'back'. I was dumbfounded. I didn't believe him, but he said he'd imported a white one, together with a bunch of other breeds and that it was here in the country, ready for sale. I didn't believe it till a little white mini came bounding towards us. It was a whirlwind of excitement as my husband and I, together with our 3 little boys organized to bring this little man home. His name is Jack-Jack. He is 5 months old. He is lovable, quiet, protective, playful, seems like he's quickly getting house broken and responds well to training. He's white or so it seems, I can see the original schnauzer cut under the overgrown fur/hair, but from the yucky wire cages in the pet store the ends of his fur have gone completely brown.
I don't know if he's a white schnauzer, a white and peach schnauzer? I don't know if to shave him completely and start over? Or if to give him a typical schnauzer trim and use other things to try to whiten his fur. Is there any way that you can tell if a dog is a particular breed? In other words, I think he looks like a schnauzer even though he's over grown but without papers etc, can I be mistaken? His temperament is winning, so I wouldn't care if he isn't but it would be nice to know.
Thanks, Patty