Is Charlie a giant schnoodle? 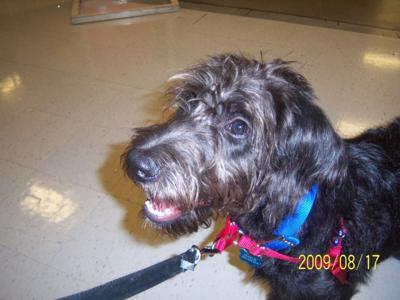 We adopted Charlie when he was four months old from a shelter and were told he was a schnoodle(no mention of the word "giant"!!). He was about 25 pounds at four months, now at 7 months he is about 55 pounds or so. He is so playful: his favorite activities include splashing (but not swimming) in the pool, going for walks, and fetching a tennis ball.
One unique thing about him is the sound of his bark. I dont even know how to describe it other than to say it is somewhat sing-songy and somewhat hoarse.
When excited, he can jump fairly high off of all four legs. He is a great family dog and loves children and other dogs. He is also learning commands from his training classes fairly easily.
He has adapted wonderfully to our family schedule and predicts daily events better than any clock (time to get up, time to go to bed, time for the kids to come home etc.)

So, to those of you who know your schnoodles, please take a look at his picture and tell us what you think. Is Charlie a (giant)schnoodle?