Fascinating story of a Miniature Schnauzer - and his Peeing Problems 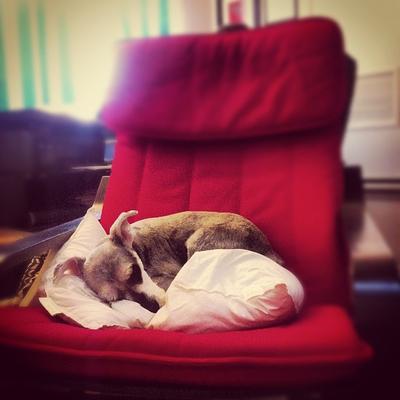 He is such a sweetie 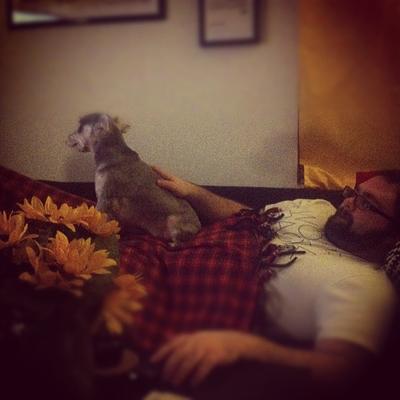 He LOVES our TV and watching movies at night with us.

Hello All!
I am writing this today in hopes that someone may be able to shine some light on my little mini Schnauzer who has recently been having accidents in the apartment. Here is a little back story:

My boyfriend and I adopted Scrabble from my sister and Brother-In-Law. The past few weeks, I know, have probably been a little confusing for him due to the move and now new adjustment to a new pair of owners. I have been telling myself that any issues are merely from him adjusting to his new home, but I hope that's not naivety on my end.

My sister and brother in law adopted Scrabble when he was just a tiny little puppy. They potty trained him, or housebroke him I should say, and also taught him a series of common tricks (sit, lay down, paw, up, down and even how to quietly bark instead of loudly barking). He is a sweetheart.
For the most part, he enjoys cuddling, but he is also very active and loves throwing the bone back and forth. For the first two years, my sister and brother-in-law gave him endless amounts of attention. When my sister discovered that she wouldn't be able to have children, Scrabble took on the role of baby. A dangerous role which he never asked for. Then, of course, my sister became pregnant, and before we all knew it, Scrabble started to fall to the back burner.
My sister ended up buying a house. So the three moved to a different space, and one that needed a lot of work. For a good amount of time, Scrabble was confined to a crate or one room. Mostly for his safety since the house was torn apart. When my sister had her daughter, Scrabble had a hard time with the adjustment but managed to be nice and calm around the little one. Soon my brother-in-law started traveling more for work, which left my sister overwhelmed having to take care of the dog and baby on her own.
When she discovered recently that she was pregnant again, their little family decided it was better for Scrabble to be with a family who could give him the attention he deserved. When she told me that she was going to give Scrabble to a shelter, I nearly lost it. I love him so much, I couldn't imagine him being in any other family.

My boyfriend and I live in a VERY pet friendly community with lots of green grass and space to go on beautiful walks. We have a nice dog park, and live across from a super big park, so we of course decided that we could give the little guy everything he was lacking at home. We both work in the film industry, so our schedules are VERY flexible and we are able to be home with our doggy all day.
Things have been GREAT, EXCEPT for the accidents he has had. In total, he has only had three, but I fear more. We can't keep cleaning up urine spots, especially since we don't OWN our home.

The first time Scrabble peed was when he first entered our apartment. Literally, within one minute of being in our place for the first time, he peed on a bookshelf. I didn't get upset. I took that as him "marking his territory" which I understood.

The second time Scrabble peed was when he first met my boyfriends mother. I can also understand why he urinated. My boyfriends mom was nervous around him (his bark is scary and he has a bit of an issue meeting new people, which we plan on taking him to a class to hopefully help him with) and I think he detected that.
hen she walked past his crate he snapped at her, so I put him in his crate while I took my boyfriends mom outside. We don't have a screen door, so to prevent him from getting out when the door opens, we usually barricade him in a room, but since everything happened so fast, I just put him in his cage. When I walked back into our bedroom, where his cage is, I noticed that he had peed. Not IN his crate. He aimed so that it went outside of it. I figured that he felt threatened by my boyfriends mother and that he felt he needed to again "Mark his territory" when he felt she was too close to his "house." Again, totally understand.

This third time that Scrabble had an accident, I just don't understand. He had just come in from a long walk and had been playing with my boyfriend. In a ten minute span, my boyfriend went to the computer to check his email, while I went to the bathroom to put on my makeup. Scrabble was cuddled up on the couch sleeping. As I was finishing up in the bathroom, I heard our bedroom door creak, as if someone was opening it. I came out of the bathroom, to find Scrabble with my boyfriend. I looked at our bedroom door, and apparently somewhere in that ten minute span, Scrabble had peed on the door. He gave us no warning that he had to go outside. I heard no barking, whimpering, crying, or clawing. He ALWAYS goes to the door when he needs to go potty, even if it's just fifteen minutes after a walk. All I can think is that he was maybe mad at us for not paying attention to him. I just don't get it though because we have been VERY sensitive to him. We know that he needs lots of attention, so we spend about 80% of our day with him. I just can't understand why in ten minutes he would rebel.

My fear is that this habit will only get worse. I've cleaned all his "spots" with white vinegar and water and have decided to try some positive re-enforcement for outdoor peeing. Is there anything else I should be trying? He was just at the vet where he got checked for a UTI and everything came back negative, so I know for sure that he doesn't have a medical problem. And since he is only four, I can't imagine that it would be incontinence. Any advice or encouragement would be great. We love our little Scrabble and want to keep him around for a long time!