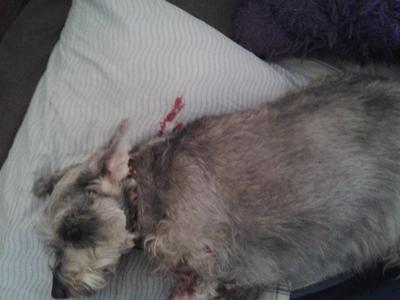 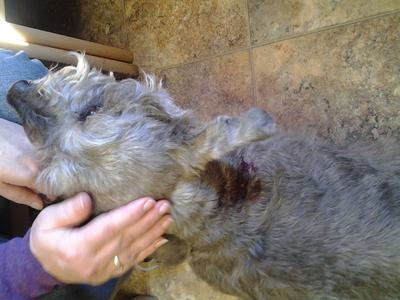 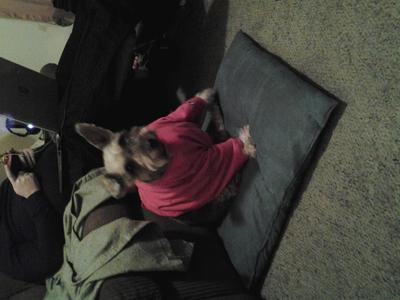 You guys have read my rants about the loose dogs running about in my neighborhood. Well, our luck ran out. Buddy got attacked by a loose pit bull in our back alley on Wednesday. My wife ran out just as this pit was pinning Buddy on his back and was going for his neck. Luckily, the dog ran off and Sandy was able to help Buddy inside. The attacking pit bull's name is Roxie. She lives across the alley from us. Her and Buddy and Maddie have had yard time many times before. I have pet her and actually interact with her several times a week. The main problem I had was that the owner would just let her run loose. She seemed like a very docile and loving dog. Until Wednesday, that is.

Animal control responded in force and we identified the offending canine. The owner admitted to letting her run loose all the time. She does not have current rabies shots. Roxie was impounded and the owner was given many violation citations. She is now in 10-day quarantine to see if she has rabies.

Back to Buddy. When Sandy got him back inside, he went straight to my side of the bed and hunkered down on my pillows. A known comfy spot. I was in my basement workshop when Sandy yelled down that Buddy had been attacked by Roxie. I flew upstairs and went to him. He was visibly upset and bleeding badly. I made sure that he was breathing good and was as comfortable as he could be. I then started to assess his injuries. He didn't like that a whole bunch and bit me on the wrist. My wound was minor compared to his. We called the vet and they said to bring him in immediately. We put him in the carrier (which he did not like) for the ride to the vet. The only time he cried was when he put weight on his left front leg. I could see that he was tore up pretty badly on his leg and the back of his neck.

A whirlwind of examinations, checks, x-rays and stitches quickly followed. There was some good news at this point...nothing broken, torn, ripped or pierced. He had 18 puncture wounds on his leg and neck, some almost to the bone. It took nearly 40 stitches to close up the major wounds. They wanted to put an e collar on him so he wouldn't lick at the sutures. They couldn't because of the neck wounds. No "cone of shame" for my beefy, big guy.

As of today, he is putting some weight on his injured leg and is eating and sleeping well. We know he is hurting because he will let ME pick him up and carry him on and off the front porch. He absolutely doesn't like being picked up. We are giving him his pain meds and antibiotics and letting him rule the roost. Maddie doesn't like all the attention Buddy is getting, but she seems to know that he is hurt and is being very affectionate towards him. To keep him from licking at his wounds we have put a t-shirt on him. He looks very cute wearing his shirt.

I will not rant about the pit bull mystique. They are dogs, just the same as my Schnauzers. I just can't imagine my Schnauzers attacking another dog that they have been around for several years though. It is the careless and irresponsible actions of the dog owner that directly contributed to this incident. I will be paying him a neighborly visit this afternoon with the hefty vet bill. If he refuses to pay, I will pursue legal remedy through the courts.

I have attached some pictures of Buddy before we took him to the vet. They are a bit graphic, so be warned. I have also attached a pic of him wearing his cool little t-shirt. Real men wear pink.