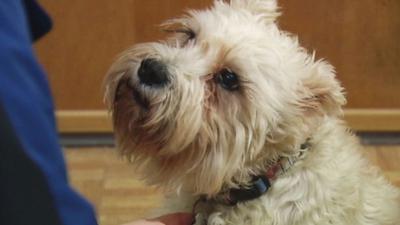 Call it coincidence or love, but a miniature Schnauzer in Cedar Rapids, Iowa, ended up at the hospital where her owner is battling cancer -- even though the dog was originally 20 blocks away at home.
A surveillance camera in the hospital lobby caught the dog entering through the automatic doors and wandering around.

The dog, named Sissy, belongs to Nancy Franck, 64, who has been at Mercy Medical Center for about two weeks following surgery. Her husband, Dale Franck, 66, had been taking care of Sissy and her brother Barney, also a miniature Schnauzer, back home.

“She was on a mission that night to see her mom," Dale Franck told ABC News today, "but she couldn't find the right elevator to take."

He said he noticed Sissy was missing around 1:30 a.m. this past Saturday, and he was worried sick.

"I kept checking everywhere, calling out, 'Sissy! Sissy!'" he recalled. "I was pulling my hair out."He finally got a call at 5:30 a.m. from security officer Samantha Conrad at the hospital, saying she had found his dog, he said.
"She found my number and house address from her tag on her collar," Dale Franck said. "I was so relieved, and I asked my daughter go and pick her up."

The security officer and the hospital did not immediately respond to ABC News' calls for comment.

Dale Franck's daughter got permission to take Sissy up to Nancy Franck for a few minutes, he said.

"She told her mom, 'I got a surprise for you!'" Dale Franck said. "My wife was like, 'How'd you get her in here? Did you sneak her under your coat?"

His daughter said that the "little spoiled brat" ran away from home because she wanted to see her mom, Dale Franck said, though it's unclear how the dog actually got there.

"Nancy and Sissy were able to love each other for a few minutes, and then she went back with me," Dale Franck said. "She's my baby, and though it sounds funny now, it wasn't funny when she was missing. I was worried sick. I'm glad she's OK."


He has one theory about how Sissy might have gotten 20 blocks to his wife.
"The only thing I could think of was that Sissy used to ride with me to pick up my wife from work next door to the hospital," Dale Franck said. "But we've never walked that route before."

Nancy Franck has been battling uterine cancer, and though doctors believe most of the cancer is gone, she is undergoing chemotherapy to make sure, Dale Franck said.

"She has a close relationship with Sissy," he added. "Sissy's 11 now, and we bought her when she was just about 8 weeks old. She came up to me, scratched my leg and fell asleep on my shoulder. I'd say we didn't pick her, she picked us." I just had to post this story because sissy looks just like zach, the puppy that we use to have and this story brought back so many good memories.